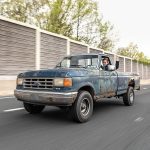 The previous owner (who is on this site :) ) had modified this Audi A4 for track use but grew out of it after a few runs. I picked it up relatively inexpensively as the car had been gutted and modified quite extensively and had many issues. I had a shop take care of the electrical work and pieced back the interior. After it was all done it was a great daily with an extra kick from the APR tune. I ended up selling it shortly after as even after the work was done I did not have confidence in its reliability.