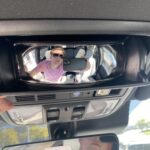 Mercedes has a bit of a habit of stretching their car’s lifespan farther than some others. Just look at how long some of the Mercedes SL models lasted. While you can criticize Mercedes for keeping some of their cars on the shelf longer than they should, providing customers with slightly outdated technology at steadily high prices, you could also argue that when the company does release a new generation vehicle, it’s national news. Take in point, the C-Class, which up until 2021, had been in its same generation, with minor improvements, since 2016. So, when Mercedes first showed us pictures of the new C-Class, needless to say, we were impressed. I still am, and here’s why.

The new C-Class, visually, doesn’t look too different from the previous generation. It carries the same shape and lines with a different front and rear end. The front gains a new optional grille that’s available on other Mercedes models such as the E, CLS, GLC, and CLA. I think it looks handsome while also giving visual cues as to it being the new generation model. As well as the front grille, new wheels are available too. The rear gets a new trunk lid with different tail-lights to match the visual appeal of the S-Class (a theme that is continued when we get inside) that makes the car look more expensive than it is.

Speaking of price, let’s talk about it. The new C-Class costs just shy under $45,000 which continues to make it the prices option out of the Big 3 German manufacturers. A top trim AMG-line model can reach into the low 60k range, which at that point, puts it in mid-range E-Class territory. But, before you buy that E-Class, there is one reason why the C-Class is worth its price: the interior.

Mercedes cabins are fantastic places to be. This is no exception. The interior is straight out of the new S-Class meaning that, as standard, you get the massive center control screen as well as the same digital cluster as the S-Class. It is joyous. Mercedes UI has always been one of the best in the market and getting their newest technology standard on a sub 50k car is a massive selling point that is sure to help the C-Class stand out against its rivals. The technology doesn’t stop at the screen though, as the new C-Class also comes with lane keep assist, adaptive cruise control, a radio that will turn up and down music to combat wind noise, a heads-up display, and a light that will come on telling you to ease off the accelerator if the car feels you’re too close to the vehicle in front.

The rest of the interior is a pretty standard Mercedes. Clean fit and finish, classy materials, soft-touch buttons on the steering wheel, and exquisite leather as far as the eye can see. I am less of a “faux-carbon” guy, so that could be my only major complaint up front, but at that point, I’m nitpicking. The soft-touch that I mentioned earlier will take some getting used to. There is no physical click when you press something to move it, only a slight bit of movement before whatever you pressed starts to affect your surroundings. It is most noticeable on the seat controls, where I had some mild difficulty setting my seat. That being said, considering how other manufacturers are also switching to soft-touch controls, I am pretty confident that we as humans will get used to it fairly quickly. Rear seat legroom also isn’t an issue, with it being tall people friendly, and available with two USB-C ports under the air vents.

The C300 drives as well as you would expect a Mercedes to drive. On bumpy i-795, the car felt smooth and silky, gliding over bumps without much disturbance in the cabin nor excess noise. As stated earlier, the automatic volume changing for the radio minimizes the road noise even more and makes sending voicemails easy peasy. In eco mode, the mild-hybrid 4cyl still has some get up and go while also providing a much better average fuel economy while driving, one that is similar to a smaller car. In sport mode, the C-Class wants to be an AMG so badly. The exhaust gets louder, the handling gets sharper and the digital screen turns red. It is an enjoyable drive, sporting just as much performance and poise as the 3 Series while riding better than anything the Bavarians could ever put together.

The C-Class is a fantastic improvement over the previous generation. It blows the 3 Series and A4 out of the water with looks, tech, and comfort while also giving the look and appeal of a much, much larger car than it really is. It’s a smart buy for anyone looking to slide themselves into a Mercedes now that both the A-Class and CLA are exiting production in the US. Yes, it is pricier, but god is it worth it.

Massive thank you to Oliver Lippman from Mercedes-Benz Owings Mills for letting me drive the new C-Class. He is great and so is the dealership. You can take a look at their website here.