Back to Blogs
The Volkswagen Golf R Spektrum Program 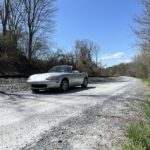 In 2019, the 7th-Generation Golf R was heading for retirement. Known as the MK7, and subsequently facelifted MK7.5 Golf R, the R received critical acclaim all around. From its sophisticated styling inside and out, effortless performance, and easy everyday livability, the MK7 and MK7.5 Golf R quickly became a fan favorite amongst VW fans. During the production run, Volkswagen stunned fans and introduced the special one-year only ( in the United States) Spektrum program for enthusiasts of the brand.  The program introduced 40 custom order colors in addition to the five standard colors. To produce such rare colors, each Golf R was trucked to a separate paint facility then sent back onto the main production line. New colors ranged from the vibrant Viper Green Metallic, to the explosive TNT Orange, the majestic Violet Touch Pearl, among many other great choices. In both the US and Canada, total Spektrum cars produced totaled 577, with a large amount of colors not even reaching double digits, and three colors never made production! Amongst the most popular color choices was Viper Green, representing about 11% of all Spektrum orders. 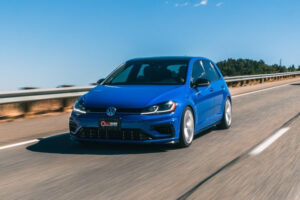 This 2018 Golf R, one of the 17 Jazz Blue R’s produced for Canada, is currently owned by ryan_jazzblueR in Denver, Colorado. The car was traded into a dealership in Michigan, who was unaware of what they had. Purchased assuming it was a “less-rare” Lapiz Blue R, it was a nice surprise to find out that it was actually a Spektrum! This is likely the sixth Jazz Blue R in the United States in addition to the five originally shipped to the United States.

This particular R has been modified with both Unitronic engine and transmission tunes, increasing the power! VWR lowering springs assist in lowering the center of gravity, and a Resonator delete pipe and 034Motorsports downpipe help the 4-cylinder scream! A black vinyl wrap applied to the roof helps differentiate this R from the rest, as well as the VW Atlas Prisma wheels. 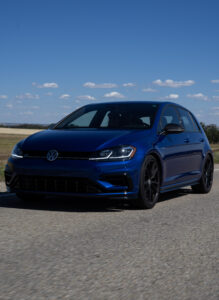 Many say three’s a crowd, but in terms of the Spektrum program, Inky Blue Pearl represents one of the rarest colors available. With only three Inky Blue Pearl Golf R’s, all delivered in Canada nonetheless, inkyblue7r was able to find this 2019 Golf R, where it has since resided in Calgary, Alberta, Canada. 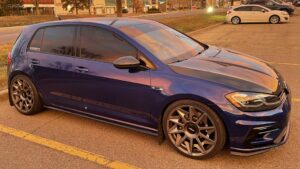 It’s always special being first, and for 1/3 inky blue pearly golf R, their 2018 Golf R is just that, the first of three total Inky Blue Pearl Golf R’s produced. Since taking ownership, they’ve added dozens of mods from a complete VWR overhaul which includes a stage 3 tune, suspension modifications, oil cooler kits, and an intake system, as well as numerous APR modifications from a valved cat-back exhaust, roll stabilizer bar front and rear, and throttle body. To top things off, visually, many carbon fiber accessories were added such as a body brace, front lip and canards, rear diffuser, hood, and side skirts, in addition, a unique set of VWR Cup Edition alloy wheels were added among numerous other modifications. 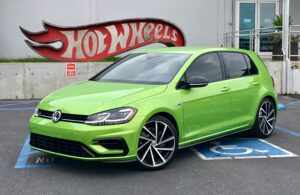 With only 1 of 33 produced in North America, this 2019 Viper Green Golf R is owned by graphic designer Matt Gabe in sunny Los Angeles, California. The vehicle features a range of performance modifications ranging from Bilstein Coilovers, a Remus cat-back exhaust, an EMD rear sway bar, a Neuspeed power module, as well as a turbo inlet Pipe and turbo muffler delete. In addition to the many performance mods, cosmetically it features both European-style tail lights and PPF and ceramic coating to the exterior. 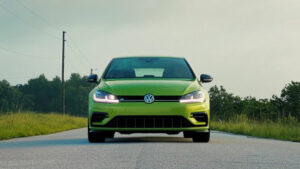 Being no stranger to the VW brand, Kyle Henderson had dreamt of getting a GTI for well over a decade, making his dreams a reality in 2017. It wasn’t until after talking with his coworkers about the Spektrum Program that he had a new dream car. Lucky for him,  he was able to find the last Viper Green R in the country back in 2019. With that, he was determined again to make his dreams a reality and traveled 700+ miles from Florida to Virginia to collect his new Golf R. 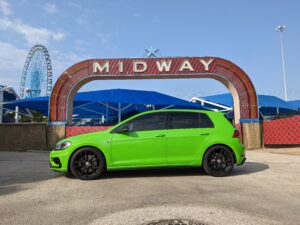 After hearing about the Spektrum Program for the Golf R, Michael Yee knew this 2019 Cliff Green Manual Golf R had to be his. Previously owned by a VW Corporate Employee from Minnesota, Michael has made a new home for it as the second owner residing down south in Dallas, Texas. 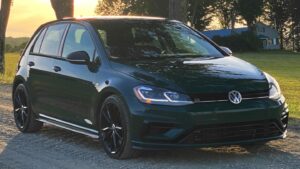 Being the only Spektrum Golf R featured from Quebec, Canada, Nick has since installed a few performance modifications, including a stage 2 tune to the engine and DSG, a downpipe, as well as an air intake. 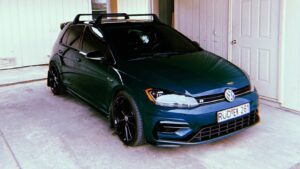 When opportunities present themselves, one must always take it. That’s what Harthbakery (also known as Pat the Rat) said to himself when he discovered this 2019 Golf R in Racing Green in Olympia, WA. The original owner had custom ordered this car only to never take delivery, presenting Pat the opportunity to have his very own Spektrum Golf R.

Since bringing his car to Colorado Springs, Colorado, Pat had added many modifications. To enhance performance, he added an Integrated Engineering cold air Intake, CTS catted downpipe, resonator delete and turbo inlet pipe. Cosmetically, an ECS carbon fiber spoiler, mirror caps, and wheel spacers were added, among the many other modifications including a Maxton Design rear diffuser, Rally Armor mud flaps, JDM crystal tsurikawa, and so much more. 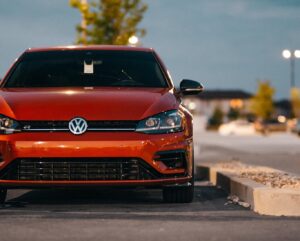 Standing out may prove to be difficult, but with Lorne Anderson’s 2019 Golf R Manual in the vibrant Copper Orange Metallic, he may just succeed in doing so. Lorne has since added an AMS Catless Downpipe. 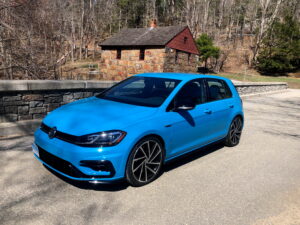 Patience can be painful, but in the end the results are worth it. For Duvelrrr patience was necessary in finding a Spektrum Golf R. After five months and several near misses, he finally found this perfect 2019 Golf R Manual in 91 Blue, bringing it all the way from Kentucky to his hometown of Storrs Mansfield, Connecticut.

This particular Golf R features a few cosmetic modifications such as the skid plate designed for the Golf Alltrack, a stealth hitch, as well as a spare tire kit. 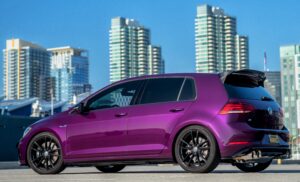 As a former Saab owner, Justin had joined the VW family at the beginning of January 2016. Justin cemented his loyalty with VW after purchasing his second Golf R in 2019, standing out much more than before with this 1 of 12 US Violet Touch Pearl Golf R.

They say to respect your elders, so that’s exactly what Alex Vimont did with his 2018 Golf R in Magma Orange. Having owned a 2007 Fahrenheit Edition GTI in the same color, Alex couldn’t help but get into another Magma Orange Golf when he had the chance.

Alex has added a long list of modifications to his Golf R. Since new, Racingline R600 intake, catch can system, sport springs, Tomioka Racing IHX 475 turbo, EQT turbo muffler delete, Cobb accessport with a custom ECT and EQT DSG tune, Black Sheep Inc catless downpipe, and ECS 2 piece aluminum brake rotors have all been added. For a unique touch, the rear c-pillar has been wrapped in a brushed black steel metallic wrap with an embossed R logo paired with Niche Gamma wheels in a bronze finish.

Good things often come in pairs. Well, for Cody Sawyer that would be the color orange. Pairing nicely with his KTM SDR Motorcycle, Cody’s Canadian-imported 2018 Golf R is 1 of 4 TNT Orange Golf R’s in the US. 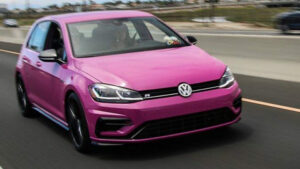 One of only three produced in traffic purple, this Golf R definitely turns heads! Although it might appear pink, this “purple” R can be spotted cruising around the streets of Torrance, California. 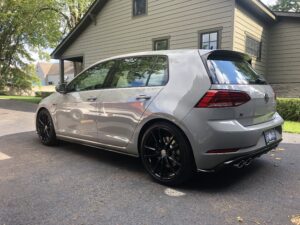 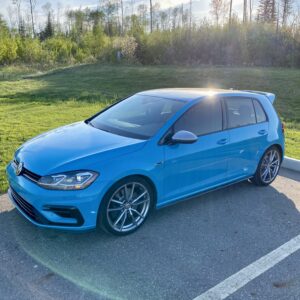 Serving as a new addition to his fleet, and the baby brother to his 92 Jetta, Jesse knew this 2018 ultra-rare 91 Blue Golf R had to be his. So what did he do? Fly all the way to Ontario from Salt Lake City to pick up his new baby. Since making it his, Jesse has added a Voomeran spoiler but we expect more mods to come!

With the Spektrum program having come to a close at the end of 2019, Volkswagen was able to end the MK7 Generation Golf R on a high note. 40 colors and 577 cars later, this small but significant number of cars will forever stand out on driveways and highways.

Special thanks to curator Adam Klein and the Spektrum Only Instagram page for assisting to compile information!