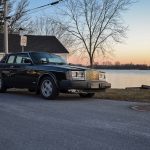 I always loved the S-Cargo, one of the four car in Nissan's short-lived "Pikes Car" division. Inspired by the looks of the Citroen 2CV, the S-Cargo is a small cargo van made from 1989 to 1991. The unique and charming look as well as the classic JDM quirks made me fall in the love the first time I saw it back in 2016 in Doug Demuro's video, and I finally was able tho obtain this dream.

I bought the car in early 2022. The car was previously owned by an arts and craft store, being used as an advertisement car with decals and such. It's been my daily driver ever since. It gets people looking and, more importantly, smiling, and I absolutely love driving it everywhere. it was made to deliver things in small japanese villages, so while it's very good in city driving, the highway is a nightmareish experience. It does get very decent gas mileage but the incredibly tiny fuel tank makes gas station stops very common, where you're sure to have bystanders come and ask you a thousand and one questions about it. It's very quickly become the favorite car I've ever owned.