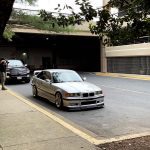 Originally, my search began in January 2019 for a fun daily driver to replace my 1991 240sx. I had always wanted an E36 and with the way the market was looking, an M3 was very affordable.

After months of having cars sold out from under me, looking at rust buckets, and dealing with Marketplace sellers, I finally decided to take a look at an M3 that was listed locally. The reason I never considered this car was because it was supercharged with an Active stage 2 kit and it was a little out of my price range, and I wanted a completely stock power train. Within 20 minutes, I was sold on the car. It was everything I was looking for in an E36, with the exception of the color. I was not thrilled on the silver paint whatsoever. Originally, I had my sights set on a Hellrot, or Alpine White M3. It didn’t take much for the silver to grow on me, though.

In July 2019 I purchased what I hope to be a forever car.

I’ve since removed the supercharger kit and begun making the car my own with small things here and there. Most notably, I finally got got off the basic APEX ARC8 wheels and found myself a beautiful set of SSR Professors that fit the car perfectly.