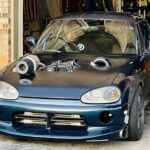 In 2011, my wife and I moved to Sasebo Japan. Got a job working for the US Navy there. First bought a car to get back and forth to work everyday. Roads in Sasebo are very narrow and a Kei car there makes driving so much easier.
Found a 2007 Honda Life at a local dealership. .660cc engine with a turbo. Great little car and we both loved it! After being there for a little while, we determined that we needed another car. I began looking and researching. Akiko told me, why don’t you just go get a GTR R32, you have always wanted one. Couldn’t believe what I was hearing. She pulled the trigger on a GTR!
Set to doing research and looking at cars, the one thing noticed right away, there seemed to be a million R32s in Sasebo.
Couldn’t have that, so started looking for other cars, with the roads being so narrow in the area, Started looking for Kei cars and the only one found that was front engined and rear wheel drive was the Suzuki Cappuccino. The more I looked into the cappuccino, the more I liked it. As driving the Honda Life into work, spotted it….. a dark green Suzuki Cappuccino at a car dealership named Focus Mobile, Egashira-San, the owner, sold exclusively foreign cars. The Cappuccino was setting off to the side and not up next to the road like other cars for sale. Stopped in and asked about the car, he was planning on selling the car at auction as it wasn’t an import. Took Akiko to the the dealership and Egashira-San agreed to sell us the car. I was ecstatic! The little all aluminum block 3 cylinder, turbo charged, 5 speed car was all mine! Second owner of the car, it was well taken care of. There were not many modifications, a loud Fujitubo exhaust and some painted interior parts. I would take my lunch time and go driving the narrow mountain roads around Sasebo Navy base, Mount Yumihari was my favorite lunch time run.
After a few almost a year, transferred to the Yokosuka navy base, but was living in Yokohama. Was 20 minutes from the most popular car meet spot in all of Japan, Daikoku Futo. Daily drove the Cappuccino every day on the famous or infamous Wangan - Bayshore Route to get to work, was in car bliss. From time to time would make the hour and a half trek south west toward Mt Fuji and would drive in an area called Hakkone. Some on the absolute best roads I have every seen in my life. The tail of the dragon in East Tennessee looks like a drag strip in comparison to some of the roads around Hakkone! The Mazda Hakkone turnpike, Hwy 75, Yugawara Parkway and all of the pig paths too small for normal size cars were a happy hunting ground for the super mini size of the cappuccino and motorcycles.
Had to have more power, so purchase a turbo kit from a famous Cappuccino tuner, Monster Sport Tuning. Came with an up graded turbo, injectors and a plug and play ECU. It sat in a box until I could find time to install it.
On one of the trips to Hakkone, starting up the mountain, had a puff of white smoke come from under the hood, it was over heating and starting to miss, killed the engine was able to turn the car around and coast back down the mountain until I could find a place to park, just happened to be at Suzuki repair shop and that were I got the bad news. The engine was blown and more than likely the aluminum head was warped. The shop owner was nice enough to let me keep the car there until I could get it towed back home. Purchased a newly rebuilt engine and set to installing it along with the newly purchased hot rod goodies! The stock .660cc engine made a whooping 63hp with the new Monster Sport bolt ons the horse power was upped to about 100. Huge in comparison, it was actually much faster.
I added to the bolt ons, a lightweight flywheel, upgraded clutch, catalytic converter delete pipe, a larger inter cooler which brought it up to 120 hp. This little monster was seriously quicker! On mountain roads, it would stay with and out run most other cars around. WRXs, Toyota 86s, MR2s, nothing could stay with this car in the curves! Nothing!
Another job called us to move to Osaka and about a year later in 2016, I got work back in the USA.
Unfortunately at the time, my car was not 25 years old and was not eligible to be imported into the United States.
Did not want to part with the Cappuccino! Refused to do so! Through a few friends on social media was able to get in touch someone in Edmonton Alberta Canada. A 15 year old car can be imported into Canada, so we shipped the car across the Pacific Ocean where it was put into storage for three and a half years. During that time, the car lost its head gasket and wasn’t driven for the last 6 months in Edmonton.

The Cappuccino finally made in across the border in March of 2020! The car sat for a few months in my garage and lamented on what to do to get it repaired. So I started researching again, this time on whether to repair what I has or make the car more powerful. Motorcycle engine transplants were tossed around, even putting in an all electric power train was a serious thought. Spoke to some folks about a Honda K-series swap with a K24 or a whole power plant from a Honda S2000. Settled on the one thing that had yet to be done to a Cappuccino, American engine swap! Started looking at the modern Mustang 2.3 liter turbo engine, but this engine is very tall. Spoke to my cousin Mark who worked at Day Racing enterprises in Nashville, he directed me to another gent at the company who has built Legends cars and he suggested Alpha Motorsports in Flint Michigan who custom builds Chevrolet Ecotec engines. Usually put into sand buggies and Volkswagens. I called up Shaun McCollie at Alpha and worked out the details. 2.4 liter Chevy LE5 Ecotec built to 425 horsepower and 420 ft/lbs of torque! Mated to a 5 speed AR5 transmission from a Pontiac Solstice GXP.
At this same time I was blessed to find someone who was willing to make the crazy engine swap! Charlie’s Custom Creations known for building some really great muscle cars and custom build cars and trucks. Can not say enough about Charlie, the level of design and engineering to get the (for this car) massive engine into the car, was an incredible feat!! Just over a year in the making.

Once the Kaiju is completed it will be the most powerful Suzuki Cappuccino in the world.
(Dyno'd at 282HP)

The goal is to not only drive the car on the street, but to also shake the car down on track with the Middle TN SCCA, Clarksville Autocross and the Ultimate Street Car Association timed track events.