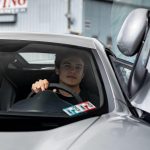 I wasn't planning on purchasing a Miata, but I found this one on the side of the road & could not pass it up. One morning, a friend called me and said that his neighbor put a Miata at the curb with a for sale sign. I immediately needed to check it out, so I drove to the Miata, and upon seeing it in person, it looked nearly perfect. As I was looking over the car, the owner walked outside and explained how she wanted a car that would allow easier access and that as much as it hurt her to sell the Miata, she wanted to see it go to a good home. I made a really good offer, and the seller luckily accepted.

The story behind this Miata is that the first owner purchased it brand new but had to sell it several years later, as his fiancé didn't want him having the car. The car then went to a new owner, who drove it regularly for almost 20 years. She didn't have the heart to let the car hit 100,000 miles, and also wanted it to go to a good home, which she knew I could provide.

The car was internally known as the "sh*t taken off" edition, as the car does not include a power antenna, a limited slip differential, or even cruise control. This Miata was essentially built to be a touring Miata, although at heart, it is still a Miata.

Plans for this car include mostly preservation, although the addition of a limited-slip and power antenna are being explored. The car is nearly flawless, only surface scratches and minor scuffs, which can be removed with a paint correction that is also being planned