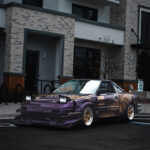 I randomly found the car on Craigslist and it was on my list of cars id love to own, so I drove an hour away to look at it. It had 96k miles on it and "no known problems"

On the way home the car stalled out and we had to replace the alternator in a gas station parking lot.

The second I got it home I started ripping it apart. I had a vision in my head and this was going to be my brand show car.

I didnt like the sideskirts and I couldn't figure out why they looked off, until my brother said it looked like the car had been tboned, so the skirt plates were fabbed up with a 90° lip to give the sides of the car a flatter look and solved the problem.

Then I bought my wheels, and had them wrapped with hankook tires.

The rear wing was actually for a e36 but the owner didnt like the look so he gave it to me in exchange for future work I would be doing on his car.

The diffuser didnt fit so it was heavily modified to fit under the car, and match the style.

The lights weren't bright enough at night so I scowered the internet looking for lights and ended up with the jeep lights, the wiring was the same plug but didn't work, so I rewired them so they would work in the mr2.

I added some drl/blinkers into the bumper and fabbed up brackets for them.

The door panels were destroyed so I ripped the fabric off, repaired them. Coated them in resin, and vinyl wrapped them. I whipped up a design that matched my vision and added it to the panels.

The hood was rusted and dented up, so I decided to cut massive vents into it to replicate a dmaxx style hood, welded side plates and fiberglassed it all together...

Next I chose the base color I wanted and purchased the wrap, wrapping the entire car gloss elderberry purple and cut out the livery in a gloss gold, and applied it to the car.

I wanted to show case the designs and work I had done so I made mini versions of previous projects and added them to the car.

The car was still missing something, so I made some splitters and canards for the car to tie it all together.

And this is where we are today. I have many more plans for this car, but as of right now I'm enjoying driving it around and attending car shows and meets.