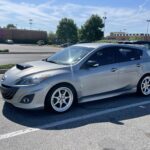 I was introduced into the mazdaspeed platform by my former boss when I used to work at valvoline a couple year back while I was in college. He use to let me drive his mazdaspeed3 sometimes around the block especially when he had a new mod on there it was something about the pure rawness in the mazdaspeed3 that made me want to get one so when I graduated college and got a better job I purchased my first speed3 which was a gen1 which was in questionable shape lol. The car was fun to drive but because it had so much high mileage and terribly rusty things started to get expensive to where I almost spent what I bought it for I had to just let it go. So I traded it in for the gen2 mazdaspeed I have now despite originally looking for a wrx I got pulled back into another speed3 which I love it.I plan on going full bolt on soon, maybe even big turbo if I run across extra money.