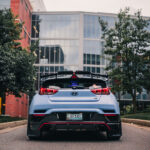 I previously owned a 2015 Veloster base. I was so torn whether I wanted to modify that or get a new N. As soon as I saw my local Hyundai was getting a 2022 Veloster N in Performance Blue, I knew I needed it. Small problem: someone placed a deposit on it. Once the car arrived, they said they’d update me on the person. I go home and an hour later they call saying the guy backed out of the deal. I was there in 15 minutes to sign the paperwork. Affectionately, but unofficially, named “Nancy”, this car has been nothing but a dream and while she may not have much of a resume as far as modifications yet, I have so many fun plans for her in the future!