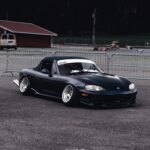 I bought the Miata about 2 years ago after I sold my r53 Mini Cooper S… I owned the car for about 2 weeks before I put it on bc coilovers and a set of vors wheels…. Coming into the following season I put a big wing on along with a set of jnc 020’s coming into this season I’m running -14 degrees of camber the cars sitting in a set of rota grids and I’m no longer running a wing. It’s a work in progress but seeing how far it’s come in the time I’ve had it makes it all worth it!