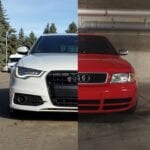 This is my 3rd B5, 2nd S4. Back in 2013 I was looking for another one and was very particular. Nogaro, Laser or Imola, low mileage, 2002(last year), blacl/silver alcantara interior. I found this one in beautiful shape but the caveat was it was a Tiptronic auto car. I had hoped for a 6MT. Now having read and seen many tip to 6mt swaps completed and documented on Audizine I knew it was possible. So I pulled the trigger and went for it. I was enjoying it for a month before putting it into storage for the winter, as the salt and sand on the roads would surely destroy it. The next summer I popped the turbos, something I knew was a bit of an inevitability. Parked it back in storage and there it sat for 2 years until 2016.

I had planned to have the swap completed by a local very competent shop and go stage 3 at the same time seeing as the engine and trans had to come out to get to the turbos anyways. I had the swap parts from my first B5 S4 that I had managed to remove from the road permanently unfortunately. In 2016 my wife and I were getting married and she supported having it to drive on our wedding day. It got the turbos replaced by the aforementioned shop and got it for our wedding day. 6k kms later in 2017, the K03 turbos went again. This time it went into our garage and I kept collecting all of the necessary parts to do the stage 3 conversion and other hardware to do the drivetrain swap. 2019 I completed the 01E trans rebuild with new syncros, 4:1 center diff and 3rd gear shift collar. In May 2021 I completed the full stage 3 build, tip to 6MT swap and trans rebuild. After spending so much time planning the build and executing it, its weird to now be able to drive it. I'll adjust ;)