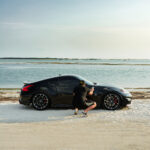 I was always a JDM tuner guy. As a kid growing up my father had a shop called "2nRworks" pronounced "tuner works". He worked on mostly Honda S2000's, and mostly building turbo kits for them, that was his specialty. So I grew up around some really fast Honda's, going to meets, drives and race tracks, I think that's what really created my love for cars especially the Japanese cars. The First car I drove was my dads "1996" Acura NSX, He taught me how to drive stick in that car. For me it was just my dads really cool sports car, all my friends loved it but I didn't realize it was such an iconic JDM car at that time. As I got older my love for cars grew and I began to research more and more cars. My first "sports car" was a 1999 Honda Prelude 5th gen LOL. It was slow I a straight line but still a really fun car in corners and of course it was manual. But after a couple years of driving the Prelude I wanted to step in to a much bigger platform. I searched for months for a car that I thought would fit me and meet my demands of a sleek, low, two seater coupe. After a lot of patients and a lot of saving money, I found exactly what I wanted. A Black 2015 Nissan 370Z Nismo... it caught my eye right away and within 2 weeks I went to the dealership and bought it. So yeah that's my story and here I am 6 months later spending a lot of money on my Z.