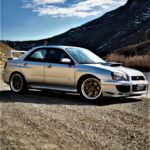 As a kid, I actually had a poster of a silver blobeye STi (along with a Mclaren F1 GT and a Lamborghini Reventon), and I always loved the idea of a factory sedan with a hood scoop and a big wing, like I thought that was awesome, and I would look at that poster and be like "it'd be pretty cool to have one of those one day". Little did I know, I would actually have a car almost identical to it sitting infront of my house not even 10 years later. I have always been a fan of Subaru's, but after owning one, putting 15k+ miles on it in the 10 months of having it, and daily driving it, I love it even more.

The goal I had for my STi just before buying it was to just have it as a daily driver/street car that I could keep OEM+, make decent power, take to meets and just enjoy. However, after owning it and driving it, I've decided that I don't think that it's enough for it. So, my goal has now shifted to make it into a streetable, purpose built time attack car, but still keep as much of the daily-able comforts as I can. As of now, I've already started racing autocross with it, trying to learn where its limits as of now are, and try to figure out how to extend those limits 1 part at a time. It's going to be a long road to reach my goal, but it's going to be a fun one!