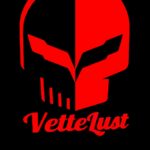 VetteLust is the 2000 Corvette C5 Targa Coupe otherwise known as "Madgie." Her nickname comes from the word imagination in the Four Tops hit song "Just My Imagination Running Away With Me." Madgie led the sheltered life of a south Florida garage queen with her first owner for most of her early years. The second owner took Madgie to West Virginia and introduced some additional performance mods. Then, in 2016 Madgie's third and current owner picked her up at just 46,000 miles and transformed her into a widebody Super Vette!